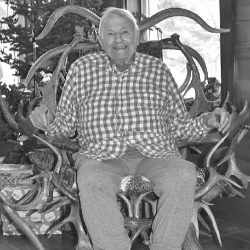 James L. Mason Sr, of West Paris, died peacefully on  March 23 at his home with his youngest son Jerrold by his side. He was 88 years old. Jim was born in Apex New York on January 18 1934 to Jesse and Mae (Utter) Mason.His family moved to South Lancaster Mass in 1936. He was educated at Browning Memorial school Elementary school and graduated from South Lancaster Academy in 1952. While attending high school he worked on the Alantic Union College dairy farm to pay for his and his younger brother Earls school tuition. In September of that same year he married the one and only love of his life Marigold (Goldie)Thurlow.  They made their home in Woodstock Maine for a few years and then built a home in West Paris. She passed suddenly in 2002, after which time he sold their home and built his home in West Paris on what he called “Antler corner”. After being married he worked on his older brother Donalds farm full time. During some of those years he also work second shift at Penley’s mill in West Paris.  When the farm was sold around 1970, he changed his career to being  a logger, cutting wood and for years he worked with his younger brother Earl, who trucked the logs.  During mud season they hauled junk cars for a few years. In 1979 his son in law, Roni Grover Sr worked with him in the logging business until around 1990. As soon as he could Jim taught his grandsons about cutting wood and logging. In the early 1950’s he started collecting shed deer and moose Antlers. He made this into a family hobby. For years he and Goldie took their three children, Jim Jr, Jeanne and Jerrold out hunting for shed antlers. He and Goldie started a home side business “Jim Mason’s Antler Shop”.  They traveled around to different craft shows and sold the novelties.  In 1964 He crafted an “Antler Chair” made all from shed antlers. The chair was featured in various articles and was housed at the big E fair in1967. The chair has been admired through out the years. Anyone lucky enough to sit it in knows that it not only is a master piece but comfortable. Jim had a eye for making unique keep sakes with the shed antlers. He was over the top thrilled that to this day his youngest son, Jerrold, grandson Lyndon and now great grandson Daxton carry on the Antler tradition. Jim was a Maine master guide for years. He loved Nature, God’s second book. Jim would very easily teach those around him about the great outdoors and all the various wildlife. Teaching his children, grandchildren and great grandchildren all the different things of nature was something he truly treasured. He has been member of the Woodstock Seventh Day Adventist church since 1952. He and Goldie were Pathfinder leaders for years and were actively involved in the church school. After the loss of the love of his life, he would spend anytime possible with his grandchildren, doing various  activities with them. He had a game that brought him much joy with his great grand children. He would ask them “are you still collecting dollars”. He was most happy with their reply and the huge smile on their  faces was “oh yes, we are still collecting dollars”.Then he would give them each a one dollar bill.  His family have a huge Thank you to all those who cared for him at home. Most of all Kiran Starr who was his primary care giver and recently other family members and friends, along with Androscoggin Home Health and Hospice. He is predeceased by his wife Goldie, their baby girl, grandchildren  Brittan Leigh Mason, Talia Hope Mason ,Tiana Faith Mason and Rebecca Lynn Mason, great grandchild, Reagan Lee Mason. All of his siblings William (Willie), Raymond, Paul, Wanda, Donald, Beryl, Walter and Earl. He is survived by his children, James Jr and Pamela, Jeanne and Roni Grover, Jerrold and Tracie Mason. Grandchildren, Roni jr and Naomi Grover, Lyndon Mason and Erica Holt, Rachel and Lianne Lewin-Grover, James III and Lauren Mason, Bryce and Ciara Mason , Raquel Grover and Tia Mason . His great-grandchildren, Kiran Starr, Kael, Quillan, Solomon, Christopher and Rowen Grover, James IV, Natalie, Elise Mason. Daxton Mason and Eva Mason. Sister in law, Nancy Mason and Brother in law Wendell Hall. Many beloved nieces and nephews.  A graveside service will be determined at a later date. In lieu of flowers or any donations in his memory please consider Seniors Plus grant program for home improvements.in Lewiston Maine.