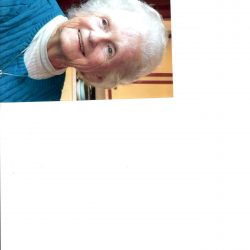 Bessie M. House, 87, of Bryant Pond passed away on March 23, 2019 peacefully at home with her loving family by her side. She was born April 5, 1931 in Greenwood, daughter of the late Theodore and Ruth (Andrews) Dunham. Bessie attended Woodstock High School and graduated with the Class of 1950.
On April 22, 1950 she married the love of her life, Bellmont “Bunker” House. She loved tending to her flowers and feeding all species of birds. She enjoyed shopping at Marden’s and occasional trips to the casino. Her family meant more to her than anything. She loved being surrounded by her children, grandchildren and great grandchildren. Some of her most memorable times were holiday gatherings and spending summers at the family camp at Bailey Island with everyone.
Bessie was a member of the Daughters of Union Veterans, Judith Grover Tent #17, Bryant Pond for 73 years.
She is survived by her husband of nearly 69 years, Bellmont. Two sons; Philip House of Auburn, Thomas House & wife Pamela of Bryant Pond. Two daughters; Betty Skalski of Norway, Maryanne Jordan and husband Troy of Bryant Pond. Nine grandchildren; Stacy White & husband Michael of Lisbon, Tammy House of Bryant Pond, Matthew Smith & wife Bobbi-Jo of Norway, Michael Smith and wife Erin of South Woodstock, Kevin Skalski of Dover, N. H. , and Kristi Skalski of South Paris. Amanda Jordan Ames and husband Adam of South Paris, Heather Jordan of Bryant Pond, and Tiffany Jordan of South Paris. Eleven Great Grandchildren and a brother Roland Dunham & wife Ruth of West Paris.
She was predeceased by 2 sisters; Ruth Alberta Scribner and Mary McMillan.
A private graveside service will be held at a later date. Burial will be at Lakeside Cemetery, Bryant Pond.