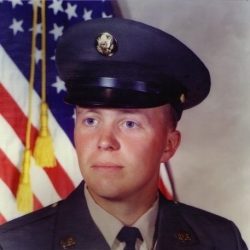 Brian was born in Rumford on October 3, 1952 to George and Florence Harriett Stowell of Andover. Educated in Bethel, Brian graduated from Telstar Regional High School in 1970 before completing military service in Germany for the US Army.

He married Linda Hathaway in West Bethel on September 4, 1976. They raised their two daughters, Sarah and Rachel in homes in Bryant Pond and West Bethel.

Brian had a long career in law enforcement, serving as a police officer for the Town of Rumford, a D.A.R.E. officer in local schools, police chief for the Town of Bethel, and as a deputy sheriff and process server for the Oxford County Sheriff’s Department. In midlife, he changed his profession to mental health and social services, working with clients through both Tri-County and Oxford County Mental Health agencies as well as Project Opportunity. His final job was as a vehicle transporter for Berlin City in New Hampshire, satisfying his love of driving and cars.

In Brian’s most active years, he enjoyed many trips to Nashville to hear the country

Brian lived with life limiting mental illness in his fifties and sixties. He stayed closer to home but found enjoyment listening to his scanner, taking pride in the accomplishments of his children and grandchildren, watching game shows and New England sports on television, taking short trips to Breau’s Too and The Bethel Twiliner, regular phone calls with his brothers and sisters, smoking cigarettes, his pet cats, family gatherings, and eating good meals. He continued to have an encyclopedic knowledge of music and entertainment trivia throughout his life.

The last months of Brian’s life were happy ones; Bub had reached an emotional state where he described himself as “doing great”. He stated last week at a Thanksgiving gathering that he was most grateful for his family and is on record that his greatest accomplishment in life is his daughters.

We are indebted to the ICU staff at Stephens Memorial Hospital. Much appreciation is extended to Heather, Carla, Samantha, Helena, Sondra, TJ, Lauren, Dr. Bray and others for their compassionate, sensitive care and for the comfort measures given to help make Brian’s death a peaceful one. Thank you to the kind man who cleaned off many of our snowy cars in the hospital parking lot shortly after Brian’s death.

A celebration of Brian’s life will be held on December 14, 2019 at the family home, 63 Rumford Avenue, Bryant Pond, Maine. There will be an open house from 1-5pm; please feel free to drop in to share a memory, some food, a toast, tear, or a laugh. Brian requested that his send-off be “a party”, not some sad affair. We’ll do our best.

Burial will be at the family plot, Flat Road, West Bethel in July of 2020.

In lieu of flowers, donations can be made to Responsible Pet Care, PO Box 82, Norway ME 04268.