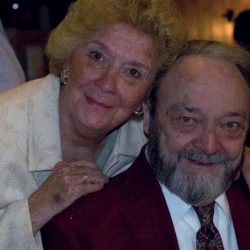 He was born in Bethel, Maine on February 24, 1929 to Alice (Joy) and D. Grover Brooks, Don attended Gould Academy (‘46), where he was captain of the football team. Don continued his education at the University of Maine at Orono, earning a degree in Electrical Engineering in 1950 before completing OCS with the US Army. After receiving an honorable discharge as 1st Lieutenant in 1956, he returned to Bethel and married Eleanor (Sumner) Brooks. For nearly 50 years, he worked long hours meeting the greater Bethel area’s plumbing and heating needs as co-owner of Brooks Brothers, keeping his expertise as Master Plumber, Master Electrician, Heating & Design Specialist, Tinsmith, and other “old school” skills in constant use.
Don was the former president of the Riverside Cemetery Association and the Oxford County Shrine, a member of the Masons and the Kora Shrine. An accomplished trombonist, Don played for nearly 80 years with various bands, including the Kora Shrine and dance bands, German band, and Mahoosuc Community Band. He was an avid reader and enjoyed spending time with family “upta camp” on Umbagog Lake in Upton.

He is survived by Eleanor, his wife of 62 years, their son Doug (Susan Vogt) of Benton, daughters Donna (Gerald Broomhall) of Greenwood and Karen (Mike Rosenberg) of Bryant Pond, brother-in-law Al Sumner of Bethel, as well as ten grandchildren, six great-grandchildren, and several nieces and nephews. He was predeceased by his brother Dana, son Michael, and great-granddaughter Adelaide.

In lieu of flowers, donations may be made to the Michael Brooks Memorial Scholarship Fund, which recognizes a Telstar athlete annually, c/o Donna Brooks, PO Box 235, Greenwood, ME, 04255.

Funeral services will be held at the Bethel Alliance Church on Saturday, January 12th at 11AM with Pastor Edward Spencer officiating, Burial will be in the spring at Riverside Cemetery, in Bethel. Arrangements by Cliff Gray Cremation & Funeral Services, 60 Andrews Road, Bryant Pond.