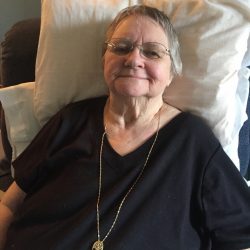 Elizabeth Alice York Cummings passed away from Covid-19 and Pneumonia at Maine Medical Center in Portland on December 24, 2020 shortly after saying goodbye to her remaining children and their families via Zoom. If you met Elizabeth or Buzzy, even briefly, you felt her generosity and boundless love, smiled at her quick wit and sharp sense of humor, and were strengthened by her great faith and deep ability to forgive. You also knew exactly where you stood with her, and what she thought about any topic from the colors of her grandchildren’s hair to presidential politics.

Elizabeth was born on May 4,, 1936 to Sherbourne F. York and Mildred Noyes York in South Paris, Maine. She grew up in Woodstock and attended Woodstock schools. She met Roenell Calvin Cummings at the Bluebird Dance Hall there in Woodstock and the two were married in 1953. As they started their family, she accompanied him to Fort Bragg, North Carolina, where he served during the Korean Conflict. They returned to Maine and bought property in West Paris, where they had four more children and their homestead remains.

She was ahead of her time while raising her oldest children in the 1950’s and 1960’s. She felt that if babies cried it was because they needed tending, couldn’t be held too much, and that children needed play and interaction, and could be found out sledding, picking berries or at the beach with them. While she gave them a lot of independence and time outside, she was firm about what was expected.

Many West Paris and Woodstock children over the years thought of her humble and cluttered home as their second home, and many were welcomed in for a weekend or the summer when there were troubles in their own homes. If you were friends with one of her children or grandchildren, you were her child, too. She had many “adopted” children and outfitted them all in home-knit mittens and hats.

When going through the family album, if she wasn’t pictured with a baby, she was showering the family pets with attention. She saved peelings for the horses, had goats as a child, babysat the house rabbit, and was guilty of giving her grand-dogs and her two cats, Lightning and Thunder, too many treats. She also never turned away the many strays that found their way into her yard on the dead-end road.

Over the years she worked off and on at local mills including Paris Gladding, washed dishes at Maurice’s Restaurant, and babysat, but in 1980 she found her true calling when she attended Region 11 Vocational School and earned her CNA certificate. She worked for Andrews Nursing Home, which became Market Square, and Androscoggin Home Health Care as well as other area agencies. She was also a founding member of the Tri-Town Ambulance Auxiliary and volunteered with them for many years. She cared for many people in the area including her eldest daughter for 10 years following a traumatic brain injury and her husband, Roenell, as he fought cancer. Even when she became a resident at Market Square herself, she still looked out for other patients and made sure the CNAs took a needed break sitting on her bed while she offered a listening ear and a hug.

She was a voracious reader, especially of romance novels and current events, loved country and western music, especially the classics of the 1950’s, and dancing with her husband of over fifty years. She was also a 30 year member of the American Legion Auxiliary Unit 72. She is survived by three daughters, Trudie Hazelton and her husband Stephen of Oxford, Diane Gaudreau and husband Tom of Bryant Pond, and Maylene Mitchell and her husband Erik of Alna, Maine. She leaves eight grandchildren, eight great-grandchildren, and many more who called her “mom”, “grammie” and “aunt”. Elizabeth was predeceased by her husband Roenell Cummings, Sr., her eldest daughter Florice Cummings Foster, and her son, Roenell Cummings, Jr.

Due to safety concerns, a private service was held at West Paris Baptist Church. The family intends to have a celebration of life in the spring when family and friends can gather outside.