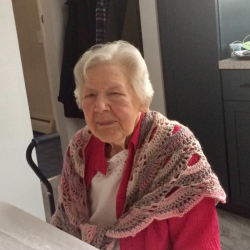 Elizabeth “Beth” Wright, 92 of West Paris, died at her home with family by her side on Sunday evening, May 31, 2020. She was born in Salem, New Jersey on January 4, 1928, the daughter of Charles and Edna (Wells) Williams, a glass-blower and a corset-fitter. Beth graduated from Glassboro High School and the Pennsylvania Bible Institute. Through her nephew, Clement York, she was introduced to her beloved husband Isaac “Edward” Wright, Jr., after he landed his Piper Cub in a nearby field. they were married in 1950, in the Presbyterian Manse by her sister Olive’s husband Rev. Joseph Morrow in Williamstown, NJ. They were married for 52 years before Ed passed suddenly in 2002. For many years, she ran Beth’s Clothing Shoppe. She was a passionate home cook, talented cross-stitcher and a woman of faith. Beth believed in the power of prayer, and dedicated much of her time to the spiritual support of her family and church friends in the many places she lived; New Jersey, Maine, New York and Minnesota. In her later years, although her eyesight was limited, she continued to find joy in the kitchen, and was grateful for her recorded books, provided free from Maine State Library Talking Books.