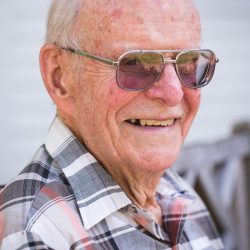 Frank A. Vogt passed peacefully on September 19, 2020 at home surrounded by loved ones. Born in Holyoke, MA on October 22, 1926, Frank graduated from Deerfield Academy and Middlebury College. He served in the navy at Corpus Cristi Naval Air Station in Texas.

At age nine, Frank accompanied his Uncle Dan Regan on a trip to Norway, Maine. This early introduction to Maine would have a profound and lasting effect on his life. It was in Norway, at Shepard’s Camps, Lake Pennesseewassee, that he met the love of his life, Janie Shepard. He was smitten – and the rest is history.

Frank taught English at Bridgton and Worcester Academies for several years before settling into a long and notable career at Gould Academy in Bethel, where he taught English, directed theatrical productions and coached several championship x-country teams. He was later inducted into Gould’s Athletic Hall of Fame. Frank cherished his many lifelong friendships with his athletes and students.

Frank had a great love and respect for the outdoors. He was an avid fly fisherman and enjoyed casting a line with many fishing buddies over the years. He coached x-country skiers with Maine Adaptive Sports into his early 80s. He was a founding member of the Mahoosuc Land Trust. He enjoyed many canoe and fishing expeditions throughout northern New England and arctic Alaska on the Noatak River. In his later years Frank enjoyed bird watching with Janie in their garden and loved sharing bird and fishing stories with everyone.

Frank was also involved in other civic activities including: twelve years on the Bethel Planning Board, president of the Lakes Association of Norway, board member of the Bethel Family Health Center, assistant boy scout leader, and member of the Western Foothills Land Trust.

The family wishes to thank Androscoggin Home Health and Hospice and the many private caregivers for the wonderful care and compassion through this recent time. Heartfelt appreciation to Judy Gould for her dedicated love and care. Mac Davis, with his consummate wit, humor, and extensive knowledge of the outdoors was a true and essential companion. Their mutual interest always was an “advanced degree in laughter”!

A memorial and celebration of life will be held at a later date.