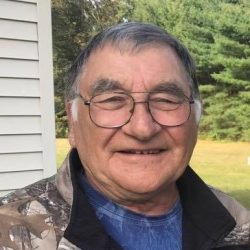 Gerald Alton Farrar, 78, of Sumner, Maine, passed away Monday, February 26, while doing what he loved.

Gerald was born April 4, 1939 to Arland and Gertrude Farrar in the same farmhouse where he later raised his own family. He graduated from Stevens High School in 1957 and served in the United States Navy before returning to his hometown, where he worked at various jobs including the Boise Cascade paper mill before becoming a full-time farrier, taking his kids and grandkids along to visit clients up and down the state. He also spent several years in local realty.

He loved cultivating his orchard and trying to keep up with the yield of his overflowing garden. The grandchildren never knew what new pickles and preserves they would be sent to find down in the cellar – or if there would be a carcass hanging in the barn. Gerald’s beloved hounds were his passion, and he could usually be found hunting coyotes with his nephew Tim and all of his buddies.

He is survived by his wife, Sandra Farrar, daughter Suzan Howard, son Darin and wife Vicki, son Mitchell and wife Pam, daughter Melissa Foss and husband Bill, and son Christopher. He is also survived by 18 grandchildren, 8 great grandchildren, 1 great great grandchild and many others who called him Grampa; his sister, Barbara Edmunds and husband Philip; his brother Dale and partner Mary Ann Barrington; as well as many nephews and nieces. He is predeceased by his son, J. Bradbury Gallant, son-in-law Richard Howard, and brothers Lee, Eugene, and Arlan.

This beloved husband, father, grandfather, uncle and friend will be greatly missed. A memorial service will be held at Hartford-Sumner Elementary School on 145 Main St., Sumner, ME on Sunday, March 4, at 2 pm with a private burial at a later date.

In lieu of flowers, donations may be sent to the Northern Chapter of the Cystic Fibrosis Foundation at 114 Perimeter Road, Nashua, NH 03063 “in memory of Gerald Farrar.” Memorial donations are also accepted at www.cff.org.

The family of Gerald Farrar would like to express our profound gratitude to each and every loved one, friend, neighbor, and community member, that assisted in their own distinct way to make the celebration of his life a reflection of the esteemed life he led.

The immense outpouring of love, support, helping hands, heartfelt sentiments, and fond memories, that have been showered upon his family from near and far is beyond comprehension and will never be forgotten. Too many to possibly name, each and every one appreciated, to include the hundreds of individuals who joined us for Gerald’s Celebration of Life Ceremony on March 4th 2018.

The family extends sincere appreciation to all who lifted a burden, lent a hand, shared a meal, instigated a smile, the list of things to be thankful for is never-ending. You blessed Gerald in life and his family in their time of reflection and remembrance. We are forever grateful and will carry every memory created far into the future for countless generations to come.