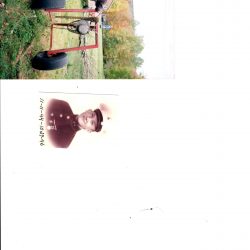 Scot L. Kendall, 92 of Woodstock, died at his home on September 11, 2019. He was born in Readfield on October 7, 1926 the son of Frank & Hazel (Damren) Kendall and was educated in local schools. Scot served his country in the U.S. Marine Corp and had worked as maintence foreman at Raytheon for many years.
He is survived by his wife Thelma (Pressey) Kendall of Woodstock; two sons Gary Scot Kendall of Woodstock and Jeffrey Kendall and his wife Darlene of Sumner; one daughter Janice Kendall Mayes of Woodstock; one brother Cecil A. Kendall of Farmington; 10 grandchildren and many great grandchildren and several great great grandchildren. He was predeceased by one brother Carlton F. Kendall and a sister Martha Jackson.
Graveside services will be held at the Robbins Cemetery, Redding Road, Woodstock (take the Tuell Hill Road off of Rte 219 to Redding Road) on Monday September 16th at 11 AM. Arrangements by Cliff Gray Cremation & Funeral Services, 60 Andrews Road, Bryant Pond.