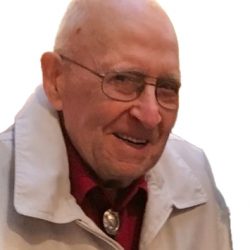 BRYANT POND – Sterling A. Mills, age 86, passed away peacefully at home surrounded by his loving family. Sterling overcame many health issues, particularly with his heart, yet it was cancer that took him from us.

Sterling was born at the family farm in Otisfield, Maine on January 26, 1934 to Eva and Norman Mills. He attended Lee Academy, graduating in June 1953. While there, Sterling met the love of his life, Irene Applebee. Sterling attended Maine Maritime Academy, where he was known as “Pappy”. He graduated in 1956, later becoming a full Lieutenant.

On June 13, 1956 he and Irene married in Irene’s hometown of Enfield, Maine and spent 64 years in a special, loving marriage. Sterling entered the U.S. Navy and received orders to report to San Diego Naval Station. He and Irene traveled cross country in his ’53 Chevy pickup and later returned to Bryant Pond, purchasing the family homestead on Rumford Avenue from his parents. There, he and Irene spent many happy years and raised their four children.

With his father, Norman, and Albert Penley Sr., Sterling founded Penley & Mills, a logging, construction, and land holding company. One of its biggest projects was building the scenic turnouts on the height of the land on Rte. 17 near Rangeley. The company also provided long term employment for many local families. Sterling also taught and served in the Naval Reserves, with family going along to Newport, RI, Norfolk, VA and Key West, FL. He later started Groundbreakers Excavation with his grandson Jason as well as Quentin Tyler.

Sterling bought a home movie camera in the 1950s and took many movies that the family still watches and treasures. In the 1960s, the family loved Sundays, attending Bryant Pond Baptist Church followed by Sunday drives to NH or bowling and getting a bite at Goodwin’s. In the 1970s, Sterling and Irene took their family to Disney World as well as Myrtle Beach, SC. Myrtle Beach became a favorite location for April vacations, and in 1995 Sterling and Irene built a house in Garden City Beach, SC, where they made many friends.

In 1986, Sterling cleared land and built a cabin on Concord Pond, Woodstock. The family spent many good times there. He later bought land on Lake Christopher, Bryant Pond and put in a cabin. The family enjoyed many pontoon boat rides with Sterling as their captain.

Sterling’s hobbies included traveling in their camper van, playing trumpet and trombone, attending concerts, fairs, and family and class reunions. He enjoyed Par 3 Golf and made a mini golf course in his yard in Bryant Pond. He enjoyed board games, particularly Pollyanna. With Pollyanna, he kept score of games won and awarded trophies. His children, their spouses, and his grandchildren are carrying on the tradition and love of the game.

Sterling was a storyteller to his children and grandchildren. He loved to spend time in the woods, on his pontoon boat, and with his collection of John Deere and Farmall tractors. He spent many hours mowing, going so far to put A/C and heat and an enclosure on his tractor. Sterling was known for his strong work ethic. His favorite place to be, however, was by his beloved Irene’s side.

Sterling received the Lee Academy Alumnus award. In 2020, Sterling and Irene received a Maine Spirit of America Foundation Tribute honor for commendable community service from the Town of Woodstock.

Memorial donations may be made to: